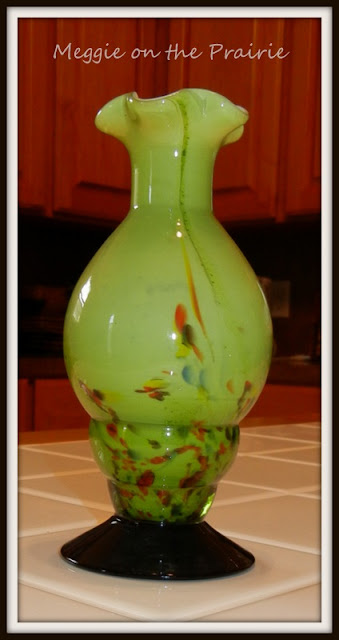 Before I became the owner of this small, approximately 12" tall, green vase, I had never heard of the term "end of day glass". 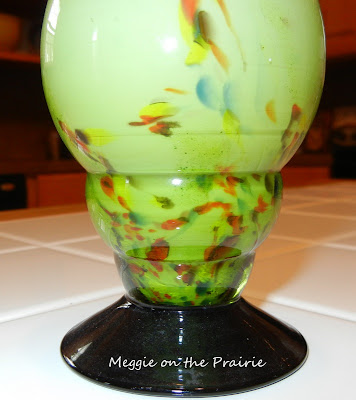 The glassworker would traditionally use up the molten glass that was leftover from the day's work. All the specks that are seen in the finished object make a very unusual, one-of-a-kind, piece of art.

Here is the description quote from the Corning Glass dictionary:
End of Day
The English term for an object made by a glassworker on his own time. Most friggers were made from the molten glass that remained in the pot at the end of the day. Such glass was considered to be a worker's perquisite. American glassworkers referred to friggers as "end of day" objects. They are also known as whimsies. 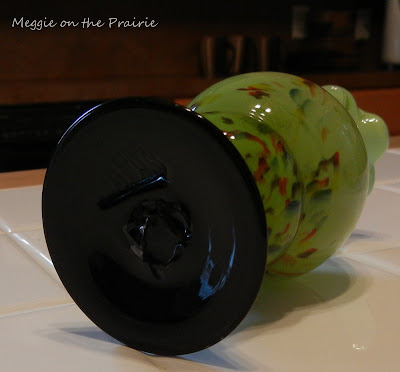 All of the pieces I have collected, have an unfinished bottom. It's difficult to see this one because the bottom part is black.

Do you think the company's owner stipulated that the glassworker was not to finish out the bottom? 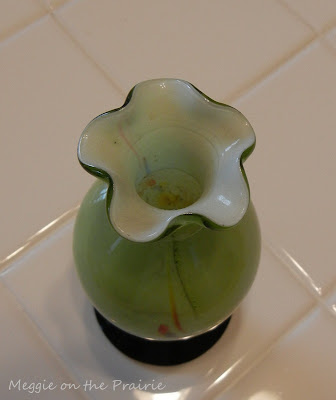 Unlike the rough cut of the bottom, the top of the vase has a delicately fluted opening.

I'm thinking, the glassblower never dreamed the pieces would become so collectible....

Meggie Mac
Posted by Meggie at 4:09 AM

Email ThisBlogThis!Share to TwitterShare to FacebookShare to Pinterest
Labels: end of day glass, show and tell