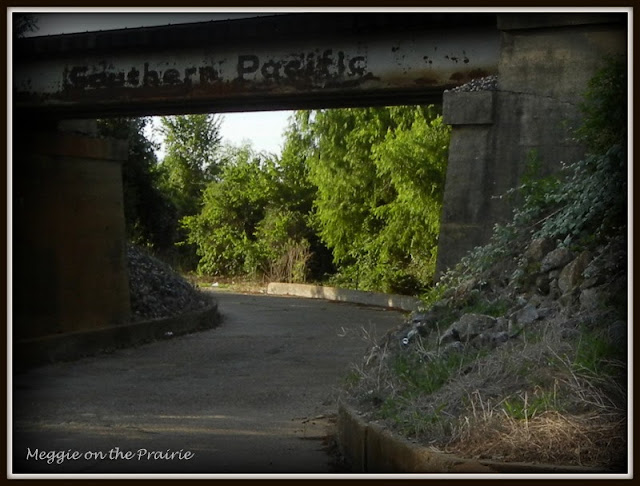 As I travel around the back roads, I often wonder how roads like this came to be. There is a train track that runs overhead. The road takes a sharp turn to the left. There are no marking as to where it leads.
I wanted to see what was on the other side...my courage only allowed me get out of the truck and photograph this side. As I got back in the truck, and continued down the main road, the poem by Robert Frost came to mind.
The Road Not Taken
Two roads diverged in a yellow wood,
And sorry I could not travel both
And be one traveler, long I stood
And looked down one as far as I could
To where it bent in the undergrowth;
Then took the other, as just as fair,
And having perhaps the better claim,
Because it was grassy and wanted wear,
Though as for that the passing there
Had worn them really about the same.
I shall be telling this with a sigh
Somewhere ages and ages hence
Two roads diverged in a wood, and I..
I took the one less traveled by,
And that has made all the difference.
Maybe I will return another day to see what lies beyond the bend in the road....
Meggie Mac